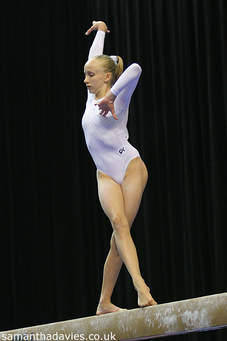 The Nastia Cup was a fight to the finish for the senior athletes tonight.  There was lots of excitement where the first place was not decided until the final event.

5th place Kimberly Tessen from All American Gymnastics received a 9.7 for a high flying Yuerchenko 1 ½.  Just a small step forward kept her from 2nd place on vault.  On bars she had a 9.45 with a Mahoney to the high bar to cast handstand hop to straddle Jaeger.  She had nice tight legs on her bail to handstand and added a blind full before her giant into full twisting double back.  She struggled on beam with a 9.375, but made up for it with a 9.55 floor routine.  Her first pass was a double layout, landing a little short, but her second pass was a round off 1 ½ into a 2/1. (same pass that Bridget Sloan actually starts with for the Florida Gators).  Her final pass was a Rudi which she completed with her chest upright.

Natalie Wojcik, from Berks Gymnastics academy, was actually in first place at the beginning of the final rotation.  She scored a 9.6 that was called out by John Rothlesberger for being too low of a score.  She stuck it cold!  On bars she started her routine on the low bar to hop up to kip to handstand, toe on handstand ½ pirouette to a Jaeger in the pike position.  Nice bail to handstand with a slight leg separation and she ended with a double layout taking a step forward.  The highlight of this meet was her gorgeous beam routine.  She smiled through the whole routine, starting with the stunning front aerial to beat jump.  Her back handspring into a back layout was flawless.  She performed a side aerial, had a minor check after her jumps, but finished with a stuck 1 ½ dismount.  She finished with a 9.6.  On floor she scored a 9.775 with her first pass being a high double pike.  She showed a unique full turn in the attitude position, always nice to see some variety.  Her second pass was a front handspring front full to punch layout and ended with Rudi into a straddle jump.

Finishing in 3rd place was Rachel Flam from Stars Gymnastics Training Center in Houston. She placed first at Nastia Cup in 2014 as well as winning the uneven bars title.  She had a 9.7 on vault competing a Yurchenko ½ on front pike off.  On the uneven bars she wowed the crowd with full twisting double layout dismount.  This elite level routine earned her a 9.4.  On beam she showed a solid back handspring into a back layout landing on two feet.  A stuck front tuck into a high switch side finishing with a double pike.  This earned her a 9.55 for second place.  On floor she scored a 9.725 for fifth place.

Here is her unique vault…

Second and first place finishers were only .075 away from each other and were competing together from the same gym.  Both come from North Stars Gymnastics Academy.  In second place was Missy Reinstadtler.  On vault she competed the Yurchenko layout 1 ½ which she  had trouble on, locking out her knee, scoring only a 9.575.  She scored a 9.5 on bars.  On beam she received a 9.55 with a stuck routine.  She performed a beautiful side Somi and ended with a high double full dismount.  On floor she started with a rare double Arabian. Her second pass was front pike through to a back double pike.  With high energy she ended with a double pike which helped her receive a 2nd place finish with a 9.825.

The final competitor of the night was Rachel Lukacs on her best event.  2 time Junior Olympic champion stuck the only double Yurchenko of the night earning her the vault title with a 9.9 and all around title with a 38.40!  On bars she did a kip to handstand , toe on handstand to Tkachev, with a pak salto down to low bar.  She finished with a double layout and a score of 9.3.  On the balance beam she was a little shaky.  She had a nice front toss and stuck her back handspring layout stepout.  She had a slight wobble on her side aerial and landed short on her double pike.  On floor she showed what power house she can be by placing first with a 9.85.  Her first pass a double layout, her second pass was a whip to 1 1/2 to front layout. She finished with huge double pike.

Here is her vault…

Another jam packed Nastia Cup in the books. I can’t wait to see who stars in it next year!